Cotton is Cash crop in the district council in terms of area under cultivation. Cotton possessed annual average area of 7,680.7 hectares of the district’s total land area under cash crops cultivation. Table 3.3 depicts that cotton was grown in most of thewardsin Magu district council. Among those wards, Nkungulu had the largest area under cotton accounting for 16.4 percent of district’s area under this crop cultivation. The next ward was Shishani (15.9 percent),Ng’haya (14.7percent), Jinjimili (12.4 percent),Lubugu (11.8 percent), Mwamanga (5.1 percent) and Bujora with 0.6hectares was the last among others.

Major cereals crops grown in Magu district council are maize and paddy, together with root tuber crops, including cassava and sweet potatoes are also considered as major food crops. Their total production during the period of 2010/11 to 2014/15 was 445,457.2tons, at an average of at 89,091.4 tons per annual (Table 3.4). Cassava with a share of 41.1 percent of the total production is the dominant food crop in the district council followed by Paddy (37.2 percent) and Maize (21.7 percent).

From crop season of 2010/11 to 2014/15, paddy production was the second in quantity after cassava. Table 3.4 gives the estimated production of paddy in tonnage by ward in Magu district council over the five years period, 2010/11 to 2014/15. In all five years, Kahangara, Nyigogo, Mwamanga,  Mwamabanza, Kitongosima, Nyanguge, Sukuma, Magumjini, Buhumbi, Kandawe,Itumbiliand Isandula ward were the main producers of paddy by harvesting cummulative annual average of 33,181.7 tons. Bumper harvest of 45,064.8 tons was observed during the season of 2014/15 while the worst harvest 25,968.8 tons was observed in 2012/13 respectively.

According to Table 3.4, Mize was mostly produced in Nkungulu ward which accounted for 27.2 percent of all tonnage of maize produced in the district council. Shishani ward was the second producer of maize by having 24.0 percent of total district tons of maize harvested during the period under consideration. Ng’haya ward with 22.7 percent,Ng’haya with 20.8percent, Lubugu ward with 14.2 percent, Jinjimili ward with 12.0 percent andKabila ward1.9 percent was the last ward among others in maize production.

There are number of reasons which make the amount of cash crops harvested either to increase or decrease.Among others, are lack of insecticides, fertilizers, prices and cost of production against revenue only among others.Production of cash crops in Magu district council fluctuated over the specified period as indicated in Table 3.4. Nevertheless, the district managed to harvest an annual average of 38,403.3tons of cash crops between 2010/14 and 2014/15. Cotton was the dominant cash crop. It had an average annual production of 7,680.7tons, of all cash crops produced in the district council.

According to Table 3.4, cotton was mostly produced in Nkungulu ward which accounted for 16.4 percent of all tonnage of cotton produced in the district council. Shishani ward was the second producer of cotton by having 15.9 percent of total district tons of cotton harvested during the period under consideration. Ng’haya ward with 14.7 percent,Jinjimili with 12.4 percent, Lubugu ward with 11.8 percent andBujora ward0.01 percent was the last ward among others in cotton production.

Table 3.5 shows an indicative estimated amount of cash crops marketed and revenue earned in 2014/15 in Magu district council. A total of 11,995,541kilograms of cotton, cassava and paddy, were among others marketed in the district council which earned a sum of TZS13,059,157,010. Most of the revenue earned was due to cassava which accounted for 77.6 percent of total revenue, followed by paddy 22.3 percent, cotton the third 0.1  percentof the district’s revenue was the last.

Contrary to the fact that Lutale ward is the main producer of cassava in the district council followed by Bujashi ward, the situation happened to be opposite when considering marketing of such crop (Table 3.5a). Lutale ward was the first ward in Magu district council for marketing of cassava. The ward marketed 2,651,025kilogram of cassava worth TZS2,385,922,500equivalent to 23.5 percent of total revenue earned by the district council through selling of that crop. Never the less, Bujashi ward was the second by earning 23.0 percent of the district’s cassava revenue obtained. Kisesa ward earned 14.5 percent and was the third in cassava marketing, Bujora wardamong others was the last earning 6.1 percent in earning revenue for marketing of such crop in year 2014/15.

In 2014/15 paddy was the second cash crop marketed in the district council after cassava (refer Table 3.4 above). Paddy earned 22.6 percent of the district’s total revenue obtained from marketing of all types of cash crops. On the other hand, Table 3.5b below indicates that Kahangara ward leading on the data of the amount of paddy sold.  By comparing the revenue earned by wards, Kahangara earned almost 27.4 percent,  Mwamanga 24.4 percent, Nyigogo 17.3 percent, Kitongosima 15.0 percent, Nyanguge 13.6 percent and lastly was Kandawe 2.3 percent of all revenue obtained from selling paddy in the district council.

As it was shown in Table 3.5, cotton with 0.1 percent of earning in the district council was the third valuable cash crop in the district. With the reference of Table 3.5c below, in the crop season of 2014/15 the district marketed a total of 1,902kg of cotton to earn a sum of TZS1,902,010. Shishani ward was the first ward in marketing of cotton by earning 15.6 percent of the district’s revenue obtained from selling of that crop. Kabila was the second (13.6 percent), Ng’haya ward was the third (13.5 percent) while MaguMjini ward among others was the last by having 1.2 percent of the district’s revenue earned through marketing of cotton.

Irrigation farming in Magu DC is feasible due to availability of water bodies especially rivers. Magu district council is endowed with a potential area for irrigation prospects of about 2,975hectares due to its geographical location, topography and ecological conditions. However, in 2014/15 season the district council managed to utilize only 622.5hectares, equivalent to 20.9 percent of the estimated irrigation area.  The largest irrigated area was found in Nyigogo (10.1 per cent) followed by Bukandwe and Mwamanga with 9.0 per cent each. The smallest area cultivated in Nkungulu ward with 0.4 per cent. Major crop irrigated was Paddy (Table 3.6).

The use of agriculture implements depend on the size of farms owned by households and or investors. The district council is among districts in the region with largest population being peasant farmers, owning about 4 to 5 hectares of farm resulted to less demand of farm implements. Table 3.7 shows that the traditional implements were highly demanded compared with modern and sophisticated implements in the district. In 2014/15, none of tractors were distributed in the district against a demand of 68 tractors and only 43 power tillers were distributed which was less than the required 179. One general observation from these data is that local authorities in Magu district council should educate their farmers on the need of changing farming system from tradition to mordernised agriculture in order to increase their productivities.

Agriculture sector performance in terms of food and cash crop production does not give a bright future on the status of food security as well as to the economy of the district council which largely depends on agriculture. Limited access of agricultural inputs especially to peasant farmers, low price of agricultural produces against production, poor agricultural practices as well as adverse weather condition are the cause of the region district’s agriculture poor performance. To revive the sector, the district council need to stick on Kilimo Kwanza guidelines by improving extension services, ensure reliable supply of agricultural inputs through improving implementation procedures of National Agricultural Input Voucher Scheme (NAIVS) policy. 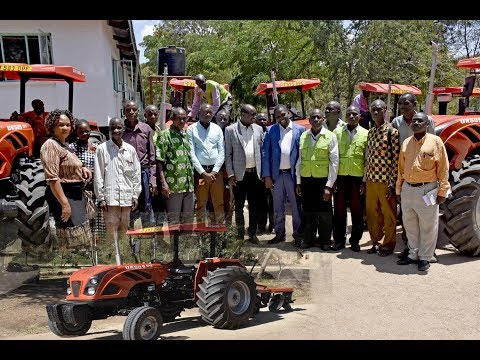